“The ideas I offer in this Budget are designed to bring middle-class economics into the 21st Century. These proposals are practical, not partisan. They’ll help working families feel more secure with paychecks that go further, help American workers upgrade their skills, so they can compete for higher-paying jobs, and help create the conditions for our businesses to keep generating good new jobs for our workers to fill. The Budget will do these things while fulfilling our most basic responsibility to keep Americans safe. We will make these investments and end the harmful spending cuts known as sequestration, by cutting inefficient spending, and closing tax loopholes. We will also put our Nation on a more sustainable fiscal path by achieving $1.8 trillion in deficit reduction, primarily from reforms in health programs, our tax code, and immigration.”It ends sequestration.

Some positives of the proposed 2016 Budget:

Some Negatives of the proposed 2016 Budget:

Overall Spending Vs. Revenues for the 2016 Proposed Budget 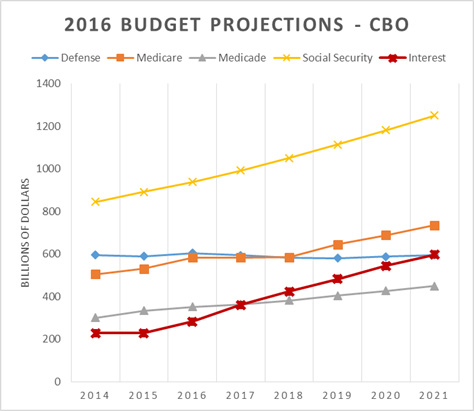 From The CBO on Economic Outlook

The Budget Deficit Continues to Shrink in 2014, but Federal Debt Is Still Growing

The federal budget deficit for fiscal year 2014 will amount to $506 billion, CBO estimates, roughly $170 billion lower than the shortfall recorded in 2013. At 2.9 percent of gross domestic product (GDP), this year’s deficit will be much smaller than those of recent years (which reached almost 10 percent of GDP in 2009) and slightly below the average of federal deficits over the past 40 years. However, by CBO’s estimates, federal debt held by the public will reach 74 percent of GDP at the end of this fiscal year—more than twice what it was at the end of 2007 and higher than in any year since 1950.

The large and increasing amount of federal debt would have serious negative consequences, including the following:

Between 2014 and 2024, annual outlays are projected to grow, on net, by $2.3 trillion, reflecting an average annual increase of 5.2 percent. Boosted by the aging of the population, the expansion of federal subsidies for health insurance, rising health care costs per beneficiary, and mounting interest costs on federal debt, spending for the three fastest-growing components of the budget accounts for 85 percent of the total projected increase in outlays over the next 10 years:

In contrast, taken together, all other spending is projected to grow by only about 20 percent. Relative to GDP, such spending would fall—from 9.3 percent this year to 7.3 percent by 2024, its lowest percentage since 1940 (the earliest year for which comparable data have been reported).